The history of Selene Yachts

Twenty years ago many Taiwanese businessmen started to open up China.  The Pearl River delta close to Hong Kong was one of the first regions which benefited from the economic reforms of the Chinese government as well as the migration of first class companies and manufacturers from Taiwan. In three decades  the Pearl River delta has changed from a rural area to a highly developed high-tech hub. The opening of the Hong Kong-Zhuhai-Macau Bridge and the Chinese vision for the development of Hong Kong and Macau in the Greater Bay Area, is already inspiring new projects like luxury marinas and holiday resorts in a region already called the “Chinese Riviera”. 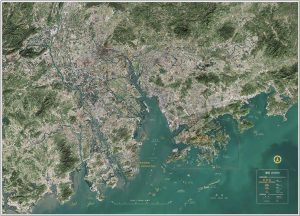 This small triangle of land and water has one of the world’s most successful economies. Its GDP is bigger than that of Indonesia, which has four times as many people! It has been growing at an average of 12% a year for the past decade. As a global trading power the region is outranked only by America and Germany…

Howard Chen, founder of Selene Yachts, ranks amongst the audacious Taiwanese pioneers who moved to China filled with dreams and brimming with ideas. His family company, Jet Tern Group, was the largest tableware manufacturer in the world in the 90’s. In 1998, Howard established Jet Tern Marine, his first shipyard in Dongguan, swiftly followed by a second one in Zhuhai in 2003. Until the global financial crisis of 2008, 30 to 45 long range Selene Yachts were delivered around the world every year!

The rebirth of the eagle

But Howard is not only a businessman. He is also deeply inspired by his Chinese culture, and likes to refer to his career in China to an ancient Chinese legend regarding the life of the eagle. Once an eagle has lived to its old age, he is given the choice to patiently wait for his natural death and eternal rest, or fight for a chance at a second life… but unlike the phoenix rising from the ashes, the eagle reincarnates, or more precisely, moults  and becomes a new bird taking to the skies. This painstaking ordeal takes months and requires three important things. First, the decision to survive. Second, finding shelter for safety during the transformation.  Third, food even carrion, to survive the  rebirth process. The eagle will then smash its old beak by hitting rocks, and pull out its own claws and feathers. Without a doubt, it is a long and painful process, one that shows the eagle’s bravery and resolve. But this torture is a crucial step for the eagle to be granted its second life, just as the price for greatness is steep. Eventually, with its new beak, claws and feathers, the reborn eagle will soar to the skies and fly for another 30 years…

For Howard Chen, the move from Taiwan to the Pearl River happened during the first life of the eagle. But after suffering the declining orders for his yachts during the 2008 financial crisis, it was time for Howard to begin considering the Rebirth of the Eagle. In order to face the evolving market, he decided to not only improve the quality of his yachts, but also started to design new models such as his Selene 92 Explorer, his first collaboration with Dutch architect Guido de Groot. In 2017, the Selene 92 Explorer was listed as one of the top ten best cruisers of the year. 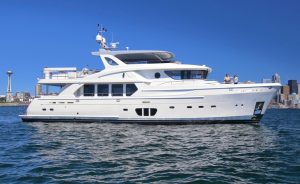 The symbol of the Rebirth of the Eagle is deeply embedded in Chinese business culture. The new beak represents a new business model with a company in constant evolution to gain market share, whilst the new claws symbolizes strong manpower and the efficiency of teamwork, and the new feathers indicate that the eagle is once more light enough to catch the ascending wind currents in order to soar as high as the winds will allow.

Like the eagle of the legends of old, the resurgence of Selene Yachts has given birth to a new bird that will soar high for another thirty years! Selene is once more a flourishing shipyard…

Chinese readers may like to see how a famous Taiwanese magazine “Global View” refers to the legend of the “Rebirth of the eagle” in connection with the Selene Yachts shipyards: https://www.gvm.com.tw/article.html?id=43586&from=singlemessage&isappinstalled=0