In the wake of a Selene Voyager…

It’s a sophisticated coastal cruiser which offers a spacious salon, flybridge, and a practical engine room. The enlarged fuel tanks of 700 gallons (2650 l) guarantees longer cruising range, with elegance, simplicity, and perhaps most important of all, easy maintenance for the operator. The Selene 42 Voyager Sedan is a typical gentleman’s boat… 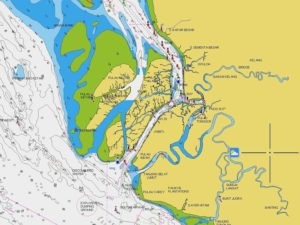 The Selene 42 Voyager Sedan may look like a luxury Tropezian or Bahamian yacht designed for relaxing evenings at the marina or at anchor in a pristine bay, but she is definitely more than that… She is a sturdy and reliable pocket cruiser. After having owned bigger yachts, we decided that 42’ was the perfect size for a cruising couple, and after 400 NM we do not regret our decision; not only is the boat beautifully built, but she is doubtlessly seaworthy. 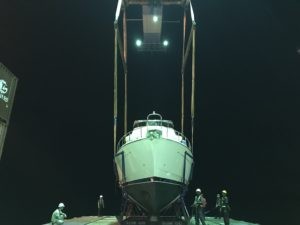 From Port Klang in Malaysia where she was discharged from a container ship, we started our yacht’s 400 NM maiden voyage in the fascinating Malacca Strait; one of the busiest shipping lanes in the world. As the main channel between the Indian and Pacific Oceans, early traders from Arabia, Africa, Persia, the Southern Indian Kingdoms, and Malay Empires, would all travel through the port of Kedah in the Malay isle of Langkawi, before reaching Guangzhou in China, their ships loaded with glassware, camphor, cotton goods, ivory, sandalwood, perfume, spice, and precious stones.

Fascinating cities are scattered all along this historical trade route; places like Singapore, Penang, Port Dickson, Malacca, and Phuket. With the wild Similan Islands farther to the northeast, along with the secluded Burmese archipelago of Mergui, and the still untouched Andaman Islands… 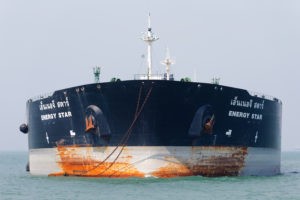 Starting from the busy West Terminal of Port Klang where the yacht was dropped in the water at night by a huge gantry crane operated by a skilled and careful team of stevedores, our crew spent three days at the dock installing the mast and preparing the boat for the long passage to Thailand.

We eventually, and wisely, decided to avoid night sailing because of the intense large carriers traffic in the region, but also in light of the bad weather during the south-west monsoon season, and of course, the many drifting fishing nets along the way. Luckily, the shipyard had installed a rope cutter on the shaft, but crews and yachts unaware of the intensive fishing industry in the strait are frequently immobilized by floating lines when sailing too close to the shore…

And although the boat is fully equipped with radar, VHF, AIS, and satellite communications, we opted for day sailing for the sake of safety and peace of mind, but mostly in order to enjoy the voyage! 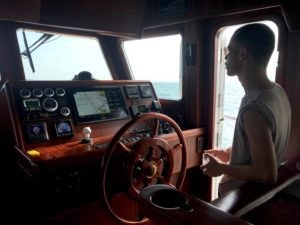 At slack tide on Day 1, we left the Royal Selangor Yacht Club, a highly recommended and charming stopover for yachts in transit with a professional and dedicated marina team led by the friendly harbor master, Mr. Zainal, and equipped with a fuel dock along with some workshops scattered about. On the evening of Day 1, after a first 90 NM passage without incident ending just at dusk, as was planned, we dropped anchor in front of Pulau Pangkor, one of the more beautiful islands of the Malacca Strait, in the idyllic bay of Teluk Nipah where we spent the night – once a refuge for local fishermen, merchants, and pirates alike.

From Selangor to Pangkor, the 180-HP John Deere engine ran like a Swiss clock and our average speed was 8.9 knots against the strong current of the strait. This engine size is perfectly adequate for the boat as it gives enough power combined with an extended range and a moderate fuel burn. 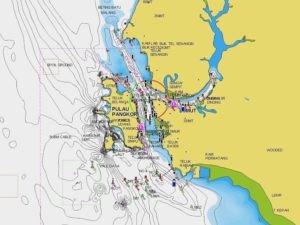 On Day 2, our crew left Pulau Pangkor at dawn, planning to call in Penang – Malaysia’s second-largest city. Penang is halfway in the Malacca Strait between Singapore and the Thai waters. Once known as Prince of Wales Island, its lively city George Town was founded by Francis Light of the British East India Company in 1786, only to later become a regional center for spice production, and a bustling harbor during the heyday of British rule. Penangites often are of Chinese ancestry, the descendants of traders, merchants, laborers, and immigrants from southern China who between the 18th century and the Chinese Revolution, sought refuge in the Malay Peninsula. Georgetown is also known for its stunning street art, with artists having come together over the last decade to create the « Georgetown Art Walk. »

Penang is definitely one of the gems of the Malacca Strait, and certainly why it is one of the favorite ports of call for all yachts cruising in the Southeast Asian region. Having arrived in the afternoon as planned after a trouble-free passage ending at the most Southern tip of the island, we anchored for the night. After the intense pressure of the off-loading in Port Klang, commissioning, and first day at sea keeping an eye on all gauges and systems running in order to detect potential concerns, we were only now able to start enjoying the comfort and luxury of this beautiful yacht. The galley is perfectly designed for long passages with its large refrigerator, three-burner stove, and an abundance of lockers, while the two staterooms allowed for peaceful nights in the air-conditioning, which we sorely needed after a long and hot day under the sun! 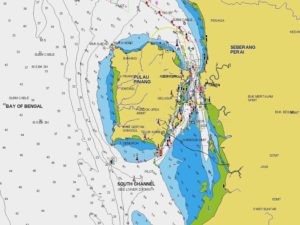 On day 3, after a rather rough passage with two-meter waves and 45 knot winds – weather conditions not uncommon during the South-West monsoon – we dropped anchor in a very secluded canyon 10 NM south of the main Langkawi Island. We shared this little corner of heaven with a small catamaran and had a wonderful evening observing the famous Langkawi eagles frantically fishing around the boat.

Langkawi is an archipelago of 99 islands with a population of one hundred thousand inhabitants – although most islands are uninhabited, with only four of the lot having settlements. Located some 28 NM off the mainland coast of northwestern Malaysia, Langkawi was historically home to seafarers, merchants, or sea peoples originally from the southern part of the Malay Peninsula, as well as pirates and fishermen.

For over two decades, Langkawi has been a highly popular stopover for navigators coming in from Australia seeking fuel or provisions, with a well-known South African butcher making real beef biltong, a delicacy made of dried meat almost impossible to find anywhere in the world but in the South African high veld and… Langkawi! 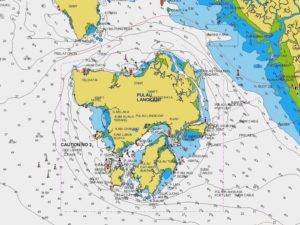 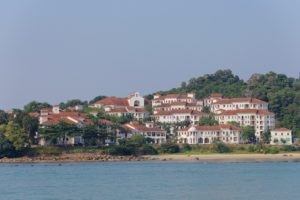 During the short three-hour passage from Langkawi to Ko Tarutao, we crossed the Malaysian-Thai border and raised the Q flag before anchoring in a beautiful and tiny bay favored by local Thai fishermen.

Tarutao island is 26.5 km long and 11 km wide, covered with a beautiful forest, and offers good shelter during the South-West monsoon. Once the location of the famous TV series « Survivors, » Tarutao’s history is fascinating for a myriad of other reasons than a mere reality show…

In the late-1930s the island was used as a penal colony for Thai prisoners. In a twist of irony, through the course of World War II, the guards and prisoners banded together and raided ships sailing through the waters near the island. The raids were masterminded by an American plantation owner who blamed the war for the loss of his fortune. The gang sank 130 ships, killing everyone on board. After the pirates of Tarutao were finally eradicated at the end of the war, fishermen took up residence on the island.

Unfortunately, we were not the only tenants of this lovely anchorage, and had to share with another three yachts… 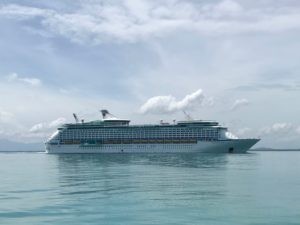 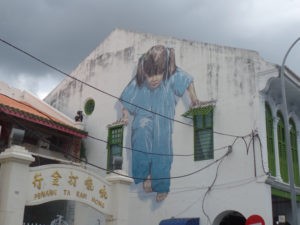 On Day 5, our crew reached Ko Lanta seeking a well needed peaceful anchorage after a difficult seven-hour passage in a very rough sea and big waves caused by a severe tropical storm. Luckily, the Phuket weather radar can help dodge the fury of the sea and usually sends out warning to nearby yachts…

All in one, the behavior of the Selene 42 Voyager in a rough sea is amazing… While we were badly shaken and listing constantly to port and starboard following the violent waves for hours, we never found ourselves at risk. The motion of the boat is smooth and always inspires trust with the bow lifting at the right moment. We were told by Howard Chen, the Selene Yachts architect, that this seaworthy hull was designed in cooperation with Ted Hood, an America’s Cup winner…

And after all, there is no better sea trial for a yacht than a storm or bad weather, and our boat passed all the tests with flying colors. Not that we enjoyed it, but we know that the yacht can take it! We have put all the systems on board to use and everything worked fine from the autopilot and microwave oven to the washing machine and air conditioning…

The boat is perfect for a couple who intends to live aboard and enjoy extended coastal cruising in style, and even more with a range of 1,700 nm at 7 knots. At this point in the trip, our average SOG from Port Klang is 8.5 knots.

After a last night at anchor west of the famous Ko Phi Phi Island, the 400 NM voyage ended up in Phuket, Thailand, where this brand new Selene 42 Voyager Sedan will dock close to a bigger sister, a Selene 80 Fishing Explorer delivered two months ago and join the ever-growing Selene South-East Asian fleet.

We are ready to enjoy our 9-month sailing season! 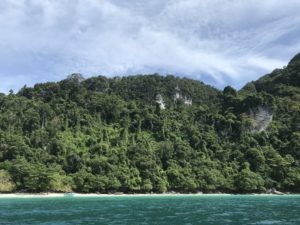 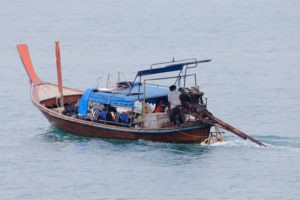